SeniorAdvisor.com Blog > Blog for Families > Caregiving > What is Shingles? 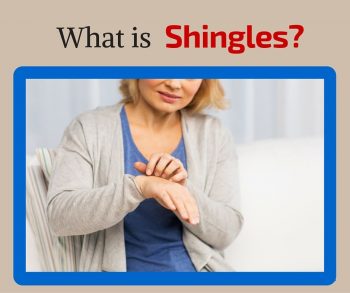 Most of us assume we left chickenpox behind in childhood, but for many adults over 60, the virus can still cause trouble. Shingles – a condition that can involve several weeks of nerve pain and an itchy, blistered rash – is common in older adults. Shingles is a result of the chickenpox virus “waking up” after decades of quietly lurking in the body.

In healthy seniors, a shingles outbreak can be an itchy annoyance or very painful, but it doesn’t have lasting effects. In immune-compromised adults and in complicated cases, shingles can cause nerve pain called post-herpetic neuralgia that lasts long after the rash clears, skin infections in rash blisters, and damage to vision, hearing, balance, or facial-muscle control. For these reasons, it’s important to get treatment if you develop a blistered, painful rash, especially if it’s on your face or if you have other health issues.

Who gets shingles, and why?

Anyone who’s ever had chickenpox can get shingles, but it appears most often in people between the ages of 60 and 80, according to the National Institutes of Health. The NIH says 1/3 of Americans age 60 or older will develop shingles at some point. Researchers say the cause is a weakening of the immune system due to illness, stress, or aging that allows the chickenpox virus to become active again. Most shingles patients only have one episode, but it’s not unheard of for people to develop shingles more than once.

Many shingles sufferers – and those hoping to avoid it – wonder if the condition is contagious. Doctors say shingles itself cannot be passed from person to person, because it’s caused by a re-activation of the dormant chickenpox virus in the body. But shingles patients can infect others with chickenpox, so it’s important to avoid babies and small children, pregnant women, and immune-compromised people during an outbreak, in case they haven’t already had chickenpox or been vaccinated against it.

What’s the treatment for shingles?

There’s no treatment that can get rid of the virus that causes shingles, but doctors can treat the pain and shorten the duration of shingles outbreaks with a combination of pain medications and antiviral drugs. Options for pain relief range from topical creams to codeine-based drugs, steroid injections, and anticonvulsant and antidepressant medications.

Can shingles be prevented?

There’s no 100-percent foolproof way to avoid shingles, but there is a vaccine, called Zostavax, that can cut your risk. The Centers for Disease Control recommends Zostavax for adults over age 59, whether or not they’ve had chickenpox. It’s a one-time injection that the CDC says reduces shingles risk by half and cuts the risk of post-herpetic neuralgia by 67%. The Mayo Clinic says vaccinated adults who do get shingles later on tend to have milder cases. Not everyone can safely get the vaccine; it’s not recommended for people with certain allergies, HIV and other immune conditions, or cancer. Medicare Parts A and B do not cover the shingles vaccine but generally Medicare Part D covers all commercially-available vaccines.

One group of people who should get the shingles vaccine, doctors say, is those who have already had shingles. That’s because the vaccine can cut the risk and severity of a recurrence. Talk to your doctor or pharmacist to decide if you should get the vaccine.