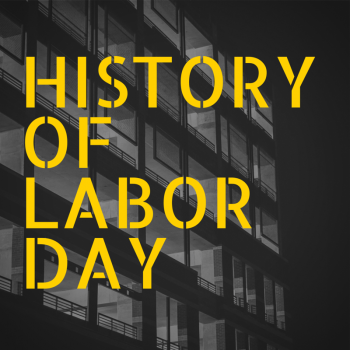 The holiday that marks the end of summer and the beginning of football season, the first Monday in September is Labor Day in the U.S. Marked by parades, barbecues, and a day off from work, it celebrates the accomplishments of the labor movement in making working conditions safer and assuring adequate time off from work. When enjoying the peaceful, fun way that Labor Day is celebrated we often forget the stormy events that eventually brought about the working conditions we enjoy today.

The Industrial Revolution brought many changes to American society: cheaper manufactured goods, plentiful urban jobs and uniform products, among others. It also brought terrible exploitation of workers in the form of ten to twelve-hour work days, child labor, seven-day work weeks and often unsafe working conditions. Surprised consumers might find a detached finger in their jam jar because canning equipment had maimed a worker, who would then be laid off with no medical treatment or benefits from the careless employer. There were disasters like the Triangle Shirtwaist fire in New York City, where 146 people died because they were locked in the upper floors to sew garments when a fire broke out in the building and the firemen’s ladders couldn’t reach that high. Most of the workers were women, aged fourteen to forty-three, mostly newly arrived immigrants. Locking workers in was a common practice.

The Haymarket Riot of May 4, 1886 in Chicago, in which about fifty workers and sixty policemen were killed, influenced President Grover Cleveland to establish Labor Day in September rather than the more universally celebrated May first, International Workers’ Day, fearing that a May holiday would be a commemoration of the massacre.

The Federation of Organized Trades and Labor Unions had set May 1, 1886, as the time that the eight-hour work day, with no cut in pay, should become standard. Employers were not in agreement. On that day in Chicago, approximately thirty-five thousand workers went on strike in support of the eight-hour day, with about ten thousand workers each striking in New York, Detroit, Milwaukee and other major industrial cities. Rallies were held across the country and it is estimated that half a million workers took part, in all. The strike remained peaceful until the end of the third day when Chicago workers confronted strikebreakers and police fired on the crowd, killing at least two people. A peaceful rally was called for the following day at Haymarket Square.

May 4 was rainy but a crowd turned out to hear speakers who admonished them to stick together in the efforts toward an eight-hour work day. When the last of the speakers was addressing the crowd, mounted police arrived telling them to disperse in spite of the peaceful nature of the assembly. Someone from the crowd threw a homemade bomb in the path of the policeman’s horse which exploded killing the policeman and injuring several others. With this provocation the police began firing on the unarmed crowd, but in the darkness may have wounded their own as well as those in the rally. Eight anarchists were arrested and sentenced harshly for having made bombs similar to the one that was thrown. Anti-union sentiment ran high and donations for medical treatment of injured policemen poured in.

This year, as we enjoy Labor Day, take a moment to remember those who fought for the good working conditions that we enjoy today in America. And when you go back to work on Tuesday, toast them with your coffee or tea during your coffee break, remember them when you use the toilet as needed, and think of them when you  punch out at the end of an eight-hour work day. We have the labor movement to thank for all of these things.