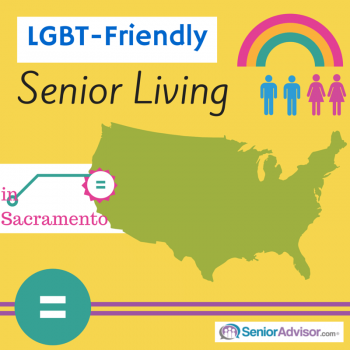 Appealing neighborhoods, walkability, reliable public transportation and great weather make Sacramento a good retirement destination for seniors in general. Sacramento’s visible and active LGBT community makes it an even more appealing choice for gay, lesbian, bisexual, and transgender seniors. The city is home to an LGBT community center and library, groups for LGBT veterans and business people, and annual events including an international film festival timed to celebrate National Coming Out Day.

The Midtown area is home to the city’s Lavender Heights neighborhood, an area well-known for gay-owned and LGBT-friendly businesses such as coffee houses, restaurants, nightclubs, shops, and the Midtown Farmer’s Market. Lavender Heights is also where you’ll find the Sacramento LGBT Community Center, sometimes referred to as “The Lambda” by locals. The center serves a 9-county area with social, arts, and support programs for youth, seniors, veterans, and the community at large.

Ten community groups meet regularly at the community center for support, sharing, and meeting new people. These groups include

Other Sacramento LGBT groups include the Sacramento Rainbow Chamber of Commerce, which offers professional networking and legislative lobbying services, and the Sacramento Valley Veterans, for LGBT former service members. SVV meetings are usually held at the Lavender Library, an LGBTQI lending library that also hosts community events and book clubs.

Every month, Second SaturGay at the community center features local artists and performers. It’s a free evening event held in conjunction with Midtown Second Saturday Art Walk. Each month has a theme, and every month has refreshments and the opportunity to meet likeminded arts patrons.

Sacramento Pride happens every June, with a parade and a festival on the Capitol Mall.

The Sacramento International Gay and Lesbian Film Festival runs every October to coincide with National Coming Out Day. Now in its 23rd year, the event raises funds for the LGBT community center and for groups serving homeless youth and people of color.

Safe, respectful, and affordable housing for LGBT elders is in short supply everywhere, but the Rainbow Village non-profit group is working to change that in Sacramento. The group is starting out by lining up support and funding resources, with the goal of eventually building a senior housing complex similar to groundbreaking LGBT senior communities in Los Angeles and Chicago. In the meantime, housing referrals are available through the LGBT Community Center.

How Much Does Sacramento Assisted Living Cost?

How Much Do Sacramento Nursing Homes Cost?

Find assisted living in Sacramento near you.