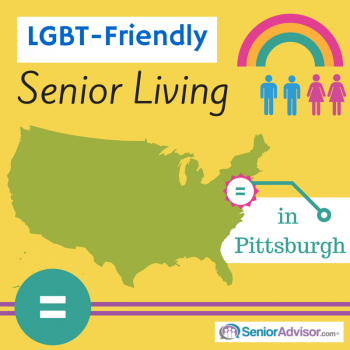 The Steel City shines as a retirement destination, especially for LGBT seniors. Pittsburgh regularly tops livable city lists thanks to its arts and culture, affordable housing, outdoor leisure options, and European-style cityscape. Pittsburgh has also earned a place on The Advocate’s 2014 Gayest Cities in America List, and Pennsylvania’s recognition of marriage equality makes the city appealing for couples who want legal protection for their housing, healthcare and estate-planning choices.

The Gay and Lesbian Community Center (GLCC Pittsburgh) maintains an extensive list of health and counseling referrals that can help residents find doctors, therapists, and other care providers attuned to LGBTQ issues.

This is the city that brought the world pop-art icon Andy Warhol, expat writer Gertrude Stein, and drag diva Sharon Needles, so it’s not a surprise that the local LGBT community is active and visible. Pittsburgh-area social opportunities for LGBT residents and allies include

Besides all these regular gatherings, Pittsburgh’s LGBTQ community hosts a couple of big annual events that draw a crowd. The ReelQ film festival has been screening the latest and best in LGBT cinema each year since 1985. Pittsburgh Pride serves up dancing, top-tier live music, a 5K fun run, and a street fair that draws more than 90,000 revelers.

People hoping to retire in Pittsburgh on a budget are in luck. The city made AARP’s 2012 list of 10 Best Places to Live on $100 a Day, based on affordable fun and relatively low median home prices.

If homeownership isn’t the goal, there are more than 200 assisted living communities in Pittsburgh and several dozen in-home care agencies to help with tasks at home. Among the local senior communities is The Devonshire of Mt. Lebanon, a winner of the 2015 Best of Assisted Living Award from SeniorAdvisor.com.

How Much Does Pittsburgh Assisted Living Cost?

How Much Do Pittsburgh Nursing Homes Cost?

Find assisted living in Pittsburgh near you.