What’s the Connection Between Sleep Apnea and Diabetes?

When your parents have diabetes, a good night’s rest is more important than they may realize. That’s because about half of Type 2 diabetes patients also have sleep apnea, a condition that can make diabetes symptoms worse. Earlier this year, researchers found that moderate-to-severe sleep apnea patients who used a CPAP machine for regular breathing at night had lower blood sugar levels than those who didn’t use the machines. Other research has tied sleep apnea to diabetic eye disease. 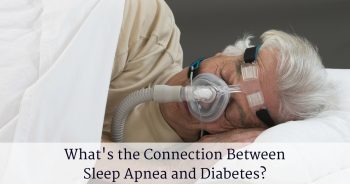 If your parents have diabetes, sleep apnea or both, here’s what you need to know about protecting their health.

Sleep apnea describes interruptions in breathing during sleep — sometimes as many as 30 times per hour. Not surprisingly, this can lead to exhaustion, but it can also cause problems with blood sugar levels, heart function, mental health and stress hormones. There are two kinds of sleep apnea that occur:

Some people with sleep apnea have a combination of central sleep and obstructive apnea. Anyone can develop it, but men have a higher risk than women and overweight people are more likely to have the condition that normal or underweight people.

According to U.S. News & World Report, somewhere between half and 80% of people with Type 2 diabetes also have obstructive sleep apnea. On their own, each condition is serious. Together, doctors say they create a vicious cycle in which poor-quality sleep elevates blood sugar and raises stress levels, which leads to more frequent night waking, which leads to fatigue-related overeating, which can make sleep apnea and diabetes worse.

People with diabetes and sleep apnea are also at increased risk of:

When You Should See a Doctor About Sleep Problems

Because sleep apnea can have such serious consequences, it’s a good idea to encourage your parents to see their doctor if you suspect they have it. If they sometimes appear to stop breathing during sleep or take long pauses between breaths and then gasp for air during sleep, they may have central sleep apnea.

Other reasons to ask your parents’ physician about sleep apnea include:

To diagnose a sleep problem, the doctor may ask your parent to keep a sleep diary to track their nighttime rest and nap patterns over a few weeks. The doctor will also ask if they have a family history of sleep apnea and whether their snore loudly or gasp and choke in their sleep.

If the physician thinks your parent may have sleep apnea, he or she will want to do a sleep study to monitor their brain activity, vital and other signs while they sleep. The study involves wearing sensors on their skin and it can be done at home with a portable machine or in a lab designed especially for sleep studies. The sleep study might record your parent’s sleep for a full night, or the doctor might order a split-night study. In this type of study, your dad or mom wears the sensors and sleeps for the first few hours. Then they use a CPAP machine for the remaining hours of sleep so the sensors can check for changes in their body’s response.

The most common treatment for sleep apnea is a CPAP (continuous positive airway pressure) machine. It has a mask that fits over the the nose to ensure regular breathing and prevent snoring. If your parents are reluctant to use a CPAP machine because they’re worried about the noise, know that new CPAP models are extremely quiet — some emit fewer decibels than a whispered voice.

There are other airflow devices that the doctor might prescribe. If there are physical obstructions causing your apnea or making it worse, like enlarged tonsils or chronically swollen adenoid glands, the physician may recommend surgery to remove them. Doctors sometimes prescribe supplemental oxygen for patients with central sleep apnea. In early October, the FDA approved a new type of treatment for moderate-to-severe central sleep apnea, an implantable device called Remede that stimulates a nerve in the chest to maintain normal breathing during sleep.

If your parents have sleep apnea, diabetes, or both, it’s important to follow the doctor’s advice and keep all follow-up appointments. Let the doctor know if there’s any trouble with the CPAP machine, if their symptoms aren’t getting better, or if you think your parents may need in-home help managing their sleep apnea and diabetes.

Learn more about caregiving for a parent with diabetes or contact SeniorAdvisor.com at 1-800-805-3621 for information about senior care options near you.

Prostate Cancer 101: What All Senior Men Should Know
How Technology Can Help Seniors Drive More Safely