3 Best Places to Retire in the U.S. 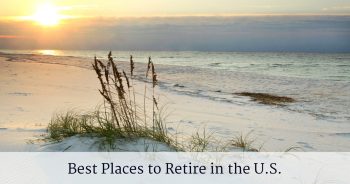 Retirement offers a gateway to living the life you have always dreamed. One of the most important things seniors can do to assure happiness and personal growth in their golden years, is to pick the best retirement location in accordance with their wants and needs.

Below is a list of specific cities in the United States we believe offer the most for retirees. We hope this will lead you to your perfect spot, or at least give you a good starting point in your search.

If you are looking for senior care in any of the below cities in the U.S., please be sure to contact a geriatric care advisor near you:

Located just 15 minutes west of New Orleans, this quaint suburb has a plethora of fantastic restaurants, local shopping and outdoor activities. With low crime and quiet nights, Metairie offers the peace and tranquility conducive to good retirement. Or you can drive a few miles down Veterans Blvd., to experience some of the best nightlife in the world: Downtown New Orleans’ Bourbon Street.

Metairie sits on Lake Pontchartrain, which is packed with outdoor activities for both you and the grandkids. You can hop on a riverboat to gamble on a floating casino, take the grandchildren camping at Fairview-Riverside or Fontainebleau State Park, enjoy birdwatching at one of the many wildlife refuges around the lake or rent a boat for the afternoon and enjoy watersports like fishing, wakeboarding and water-skiing.

For most retirees, the freedom to travel was the main reason they worked so hard in the first place. Metairie is only minutes away from Louis Armstrong New Orleans International Airport, which offers direct flights to nearly every city in Canada, Central and South America and Europe. There are also cruises yearlong. They depart New Orleans and tour the sunny Bahamas and Caribbean.

Real estate prices are also moderate in Metairie, with condo prices only slightly above the national average, at $122K.

With over 300 days of sunshine, San Antonio offers some of the best weather in the entire nation. Summers can get a bit hot, but with temperatures never dipping below 50 degrees in the winter and some of the most fantastic spring and fall months you have ever experienced, the “Alamo City” is a perfect place to retire for seniors.

San Antonio is also one of the fastest growing cities in Texas. Although the median price of condos is $181K at the writing of this piece, you can find affordable housing in many of the numerous neighborhoods sprouting up on the edges of the city, such as beautiful Helotes and Stone Oak. Furthermore, San Antonio is accessible, with both I-410 and Highway Loop 1604 circling the city. For seniors wishing to spend less on housing and live outside the city center, getting Downtown is just a quick drive away.

The Alamo City has no shortage of activities for seniors. The biggest attraction is the Riverwalk, which has essentially been San Antonio’s entertainment lifeline for generations, but there is so much to do and see in this great city. The San Antonio Spurs have won 5 NBA championships and are still considered one of the best teams in basketball. There are also exceptional cultural and natural landmarks to show the grandchildren when they visit, such as the Alamo and Bridge Caverns. For a romantic getaway, take your partner to a local vineyard in the Texas Hill Country, only a half hour outside the city. For a full weekend getaway, drive an hour north to Austin, where you can tour the Texas State Capital and University of Texas campus.

There has recently been a slew of new housing built around the city, like the high-rise condominuims around the Cleveland Street District. But don’t worry, although downtown Clearwater has undergone a recent beautification with this recent boom in development, it still has the beach-town feel that makes this Gulf Coast city one of the best retirement destination in the world.

Clearwater is such a unique city, because it is one of the only places left in the nation where you can be at a local beach town one moment, and then be in the heart of big city Tampa, just thirty minutes later. Some of the perks of living in Clearwater are the fantastic beaches (obviously), deep sea fishing, state parks and great year-round weather. For retirees who yearn to be near the ocean, they won’t be disappointed at the breathtaking sunsets along Bellaire and Clearwater Beach.

Another perk of living in Clearwater is that Orlando’s Disney World is only a two-hour drive away. Want to be known as the cool grandparents? Take them on a day trip to experience Walt Disney’s Magical Kingdom. We guarantee the little ones will be begging their parent to come visit their favorite grandparents, again next year!

Clearwater has access to Tampa Bay International Airport which can fly you anywhere in the world. Also, like New Orleans, Tampa Bay is a port for most major cruise lines in North America. So if you love being on the water, you can hop on an affordable cruise anytime. Florida is also known for some of the most fantastic beach vacations in the nation. Miami is a 5-hour drive south, and Key West just a 7-hour drive away.