SeniorAdvisor.com Blog > Blog for Families > Alzheimer's Care > What Can You Do When Dementia Causes Behavior Problems?

What Can You Do When Dementia Causes 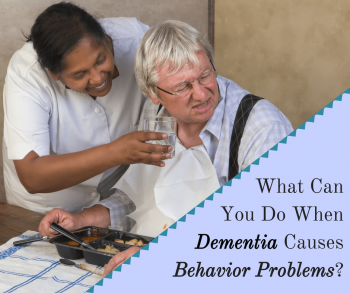 As their condition progresses, people with dementia sometimes lash out at others – even their spouses and children. This behavior can range from verbal insults to physical attacks, which can be frightening and confusing. Experienced caregivers say these fits of rage often come on suddenly and fade quickly, which can make family members and staffers nervous about their safety. Here’s what you need to know about this uncommon but distressing aspect of dementia.

What are the potential consequences of dementia aggression?

If your parent is becoming aggressive, you may face difficult choices. If they’re physically attacking you, it may no longer be safe to care for them at home. And if your mom or dad is already in a care facility, the home is legally within its rights to evict them if their actions endanger the physical safety of staffers, other residents, and visitors. For these reasons, it’s important to find ways to reduce or eliminate the behavior as soon as possible. More on that below.

How common is Alzheimer’s aggression?

The good news is that aggressive behavior is rare in dementia patients. Only five to ten percent of Alzheimer’s patients exhibit violent behavior. Doctors say it’s often a phase that passes, although while it’s happening, it’s important to try to understand what’s causing the behavior.

What are the possible causes of dementia-related violence?

Imagine being dropped into an unfamiliar setting surrounded by people who act like they know you, all telling you what to do. That would distress most of us, even without the added problem of dementia. For people whose ability to communicate has been affected by dementia, physical pain can also be a source of violent behavior, especially during activities that make them hurt worse, such as dressing or transferring from bed to chair. Drug interactions, illness, hunger, and dehydration can also lead to outbursts. Sometimes, doctors and caregivers can’t find a physical cause, but there are still steps you can take to reduce the aggression.

How to help someone with dementia aggression

If your parent or spouse starts lashing out, a medical checkup is a must to rule out physical issues and drug interactions. A geriatrician may have more insight than a general practitioner into what’s causing your parent’s behavior. Once you’ve seen the doctor, you can develop a plan to deal with physical causes, if there are any. Be sure to share that information with all your parent’s caregivers.

Also, think about how you can make your parent’s environment less stressful. Slowing down conversations and asking only one question at a time can make it easier for your mom or dad to process what’s being said. Keep their home or room calm and familiar, and make sure there are objects they recognize. Don’t take your parent’s behavior personally. That will stress you out and make it harder to be calm. Finally, take breaks from caregiving when you need them and ask for help. Your Area Agency on Aging may be able to connect you with local resources and support groups.

You can learn more about Alzheimer’s care options at SeniorAdvisor.com.

What’s a Durable Power of Attorney and How Can It Help Your Family?
What to Look for in a 55+ Community