15 Holiday Movies to Show in Your Assisted 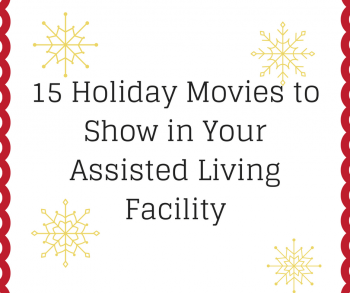 The holiday season is upon us and it’s time for your assisted living facility to join in the festivities. Every senior living in your facility came in with their own holiday traditions or favorite activities they associate with this time of year. For at least some of them, that probably means watching a favorite holiday movie.

You can help get everyone into the holiday spirit, honor some old traditions, and create new ones for many of your residents by showing holiday movies this year.

Here are a few holiday films worth considering*.

Yeah, yeah, I know everyone’s already seen it, but there’s a reason people return to this movie again and again every year. It’s heartwarming. It’s got Jimmy Stewart quite possibly at his most charming. And it’s a movie that perfectly encapsulates the holiday spirit.

Warm up some cider and put this on the TV and your residents are sure to start feeling like it’s Christmas.

A Christmas Story is a little more lighthearted and funny than It’s a Wonderful Life. If your residents want something that’s less of a tearjerker and more likely to illicit laughs, it’s a Christmas standard worth returning to.

The musical romantic comedy with Bing Crosby is sure to be a favorite amongst some of your residents. Be warned though: you might end up with a bunch of residents humming and singing the songs for days to come.

A newer film that quickly claimed a place in the Christmas movie rotation for many families, Elf is an awful lot of fun. You can count on getting a few laughs out of your residents with this one.

For something a little (or really, a lot) different, Gremlins is a creature feature set during the Christmas season. Christmas lights are strung on all the houses and the gremlins even go caroling at one point. It’s not the most obvious choice for a Christmas movie, but it’s a pretty darn fun one nonetheless.

If you’re feeling really ambitious, you can make this one a double feature with the movie’s equally Christmasy sequel. Home Alone is another movie that provides some goofy fun that your residents are likely to appreciate.

Who doesn’t love the muppets? Charles Dickens’ oft-adapted story about Ebenezer Scrooge gets played out by some familiar loveable puppets. It’s sweet, fun, and another great addition to your holiday viewing list.

It’s easy to forget that Die Hard takes place at Christmas, but the action all starts with an office Christmas party. If there are some action fans amongst your residents, throwing this into the mix is sure to make them happy.

Another musical classic, Holiday Inn would make a good double billing with White Christmas. Both star Bing Crosby and include a slate of memorable songs, but Holiday Inn adds Fred Astaire to the mix for good measure. It’s highly likely that there are residents in your assisted living facility that are big fans of both classic actors (and their singing and dancing), so this one’s perfectly designed to delight.

It wouldn’t be a Christmas movie list if there weren’t at least two versions of Dickens’ A Christmas Carol on it. Scrooged stars Bill Murray and is a clever comedy that updates the familiar story. It’s another entry on the list that’s certain to evoke laughter from your residents.

You’ve got multiple versions to choose from with this one – one from 1947 and one from 1996. Either one (or both) should work well for assisted living viewing. It’s a sweet story that tackles consumerism, faith, and what Christmas means to people.

A recent romantic comedy starring some of today’s biggest Hollywood stars, The Holiday is the only movie on our list that goes beyond Christmas and also includes a Chanukah celebration. This one’s a bit less known than a lot of the others on the list, so for residents that enjoy romantic comedies, you might be able to introduce them to a new holiday movie to enjoy this year.

The movie that famously spawned a whole series on the strength of the charisma and chemistry of its leads, The Thin Man is a fun mystery movie that happens to take place at Christmas. While the holiday season isn’t as prominent in this movie as most of the others on the list, it’s likely your assisted living facility includes a few fans of Nick and Nora who would be happy to revisit the classic this holiday season.

Make sure you break out the tissue boxes for this one. It doesn’t take place entirely at Christmas, but with several scenes taking place during the holiday season, including one at a real-life Christmas Lights Festival, it’s a good time of year to pull out the beloved movie.

If your residents want to give a new take on the old story a try, you could show the 2012 Lifetime version, which stars Queen Latifah and Alfre Woodard.

Last but not least, the Mystery Science Theatre 3000 episode that takes on the strange science-fiction comedy Santa Claus Conquers the Martians is entertaining and just the right kind of funny to work as an antidote to some of the tearjerkers on the list.

That should give you plenty to keep you and your residents busy and entertained this holiday season, but it’s by no means a comprehensive list of winter holiday movies. Ask around to see which holiday movies your residents love best. If you can screen the movies that mean a lot to them, it will make their holiday experience this year that much more special.

The Senior Heroes We Need Now: How the Golden Girls Still Inspire Us
Build a Stronger Senior Community with Respectful Communication