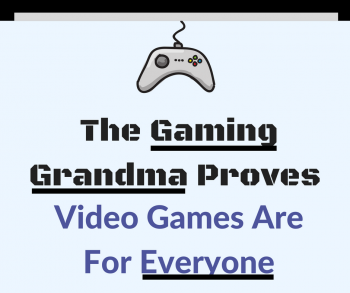 If you think video games and internet fame are only for young people, Shirley Curry wants to change your mind. Curry is an 80-year old online gamer with more than 150,000 fans on YouTube. For more than a year, her fans (she calls them her “grandkids”) have been watching her play through and comment on Elder Scrolls V: Skyrim in her YouTube videos. Curry is a star in a genre dominated by young people, but she thinks games are a great hobby for seniors.

There are already 37 million over-50 gamers in the US, and that number is growing fast. If you’re not already one of them, now may be the time to start. Video games do more than entertain – they can also deliver health and social benefits.

Researchers at North Carolina State University found that older adults who played the online multiplayer game World of Warcraft two hours a day for two weeks showed improvement on a cognitive function test – but only if they scored poorly on the test before the two-week test run began. Other researchers have found that complicated online games and PC games can help boost memory skills, too.

Console games get you moving

There’s a reason the Wii console is so popular in senior living communities. It gives older adults the chance to compete in virtual bowling, archery, and other sports without the hassle of travel and the risk of injury. Wii Fit users can also learn basic yoga postures and follow low-impact step aerobics routines for points, bragging rights, and a good workout.

Mobile games can get you started

Classic games like Tetris and Minesweeper are available as apps for smartphones and tablets, and they’re a fun and nostalgic way to get into video games. For most new gamers, free mobile game apps are often the easiest to start with, because there’s no need to buy a console and pricey games.

When you’re comfortable gaming on your phone with simple games, you’re ready to step up to the big league: Pokémon Go. This wildly popular game combines Pokémon characters with physical activity. In order to “catch ‘em all” you have to get out and about. Pokémon can be found along neighborhood streets, in shops, at museums and parks, and sometimes even in your own home.

Gaming can help you spend more time with your grandkids

Online PC and console games can be a great way to connect with family members who live far away. You can schedule online gameplay with your grandchildren and your grown kids as a fun and casual way to keep in touch between visits. The Steam gaming community is popular with young players both as a way to play and as a social network. Your grandkids may already be members.

Seniors who enjoy multiplayer games can also connect with players around the world for one-off sessions or regular meetups online. Communicating through voice and text chat—as long as everyone minds their manners–can help players meet new people and build new social connections.