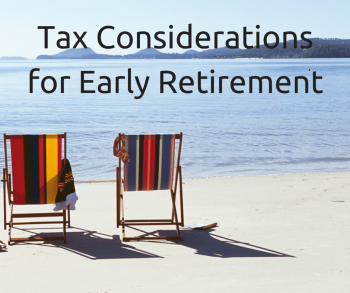 You’ve been working for a long time. You’re ready for some rest. You’ve been pondering the idea of early retirement for a while now, and you’re pretty sure you have enough saved to take the plunge and go for it. What will this mean for your taxes?

For the most part, you can count on paying less since you’ll be making less, but you will still have to pay taxes on most of the types of income you’ll have.

Different types of retirement accounts are taxed differently, but most include some penalty for pulling your money out before a certain age.

Traditional IRAs are popular for providing tax benefits over the life of the time you have them. You can deduct all the money you put into them as you go and don’t have to pay any money on the gains made each year. All that’s nice at the time, but it’s when you withdraw the money that you get hit with the taxes on it.  Expect to pay taxes on the full amount you withdraw. If you’re not yet 59 ½, then you’ll also face a 10% penalty on the withdrawal.

A Roth IRA is actually your best bet for early retirement since there’s no penalty for taking the money you’ve contributed out early, as long as you leave any gains that have been earned in there. If you do want to withdraw everything, you’ll incur a 10% penalty on the gains and you’ll also need to pay taxes on them. Contributions to Roth IRAs are taxed before you deposit them, so your withdrawals will otherwise be tax-free.

This is a little tricky and may require the help of a professional, but it is possible to invest in a traditional IRA in the years you’re working, then start to convert your money over to a Roth IRA once you start early retirement. If you convert an amount that’s equal to your deductions and exemptions and live off your capital gains, you can essentially get your retirement money tax-free.

Make Sure You Consider Taxes in Your Calculations

Nothing about retirement gets you off the hook for making tax payments to your government. So don’t forget to consider your taxes when you’re doing the calculations to determine if early retirement is feasible.

If you’re open to moving to a new state after your retire, you may find some that have more favorable tax laws that allow you to keep more of your retirement savings and any other income you have. Do some research to see if a state you’re willing to consider for your future home may make early retirement more of a reasonable possibility for you.

And don’t hesitate to talk to a professional. This stuff is complicated and it’s best to know for sure that you understand what to expect before making such a big decision. If you can swing it financially though, early retirement can provide you with more happy years in which your time is fully your own (even if your money is still partially the government’s).