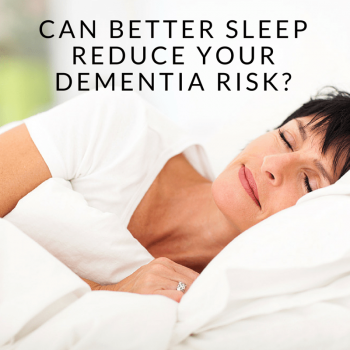 It’s no secret that poor sleep can affect memory and cognitive function in the short term, but it may also set people up for dementia in their later years. There appears to be a connection between a lack of healthy sleep and a silent buildup of beta-amyloid protein strands that are usually cleared out of the brain during deep sleep, according to recent research. Beta-amyloid is linked to dementia, and University of California at Berkeley researchers say beta-amyloid can also make it harder to get a good night’s sleep, creating a cycle that’s hard to break. The scientists say beta-amyloid isn’t the only factor in dementia, and trying to clear out the protein hasn’t shown much promise. But there is a separate, treatable sleep issue that other experts think is also linked to dementia—sleep apnea.

Researchers are also looking at how a nighttime breathing problem called sleep apnea may contribute to the dementia as well. People with sleep apnea suffer from blocked airways during sleep, caused by temporary over-relaxation of throat and mouth muscles. The blockage can lead to heavy snoring, gasping for air, even the sensation of choking—all of which disrupt sleep dozens or even hundreds of times each night, as sleepers wake briefly to resume normal breathing. Interestingly, UC San Francisco researchers who tracked 298 senior women found that those with sleep apnea were more likely to develop dementia, but the dementia was more closely linked to low blood oxygen than to poor quality sleep in the women they studied. A new study underway in Australia will test whether treatment for apnea can prevent or slow dementia.

What can we do with this information right now? Even though researchers are still learning about the links between sleep and dementia, a good night’s rest never hurts—and it can help your health in other ways, too. Doctors say sleep deprivation contributes to heart disease, weight gain, depression, anxiety, poor immune function, and diabetes.

With so much evidence for the health benefits of a good night’s sleep, getting enough shut-eye may be your most important thing you can do to protect your health now and over the long term. Finding time for a good night’s sleep can be challenging, though, especially if you’re balancing caretaking with other responsibilities. Anything that helps you get the 7 to 9 hours a night you need—ear plugs to block outside noises, overnight help at home, blackout curtains to block light, a before-bed gentle yoga routine to unkink sore muscles, or a recorded meditation to listen to while you nod off—is a worthwhile investment in yourself and the people who depend on you.

If you’re prone to sleeplessness, the Berkeley scientists recommend stepping up your daily exercise to restore more regular biorhythms. (They say sleep medications may not help you experience the kind of brain waves needed to clear beta-amyloid.) If exercise and other self-care options don’t help, ask your doctor about other options. If you think you or a loved one may have sleep apnea, it’s time to see the doctor. Modern CPAP machines are virtually silent so the apnea patient and everyone else in the house can enjoy a quiet and healthy night’s sleep—and that’s good for your health now and later.