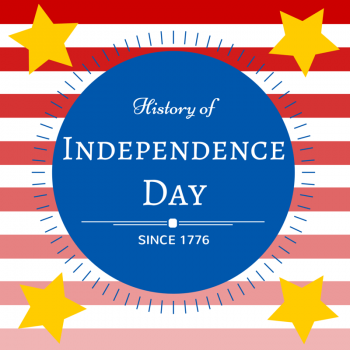 The historical Declaration of Independence endorsed by all thirteen of the states was approved by the Continental Congress on July 4th, 1776. Independence celebrations spontaneously broke out just after that along the east coast. Since then, through wars and peace, internal and external conflicts, we have celebrated the day. Many of the traditions we celebrate today were evident from the beginning: music, fireworks, and military parades.

Congress paved the way for fireworks on the Fourth of July by authorizing a display on July 4, 1777, in Philadelphia. After sundown there was a grand exhibition of fireworks, which began and concluded with thirteen rockets on the commons. In New York, the first local advertisements for fireworks appeared in 1800 and the steamship Fulton, anchored off the Battery in 1841 displayed fireworks and “glittering lamps” in honor of the day.

1849 The first Fourth of July celebration in Sacramento, California, during the gold rush.

1865 One of the first “Freedmen” celebrations occurred in Raleigh, N.C.

1892 The new flags of 44 stars representing the full number of states were flown.

1899 “Horseless-carriages” took part in a Fourth of July celebration in Dyersville, Iowa.

1901 On top of Pike’s Peak, Colorado, “the culmination of a two days’ display on the peak,” there was a huge explosion. A pyrotechnics display set off flew 500 feet long and shone for hundreds of feet in the air. The giant sheet of fireworks stars was over 14,000 feet above sea level and visible from Cheyenne, Wyoming, nearly 200 miles north, and to New Mexico, 200 miles to the south. This blast was the biggest fireworks display to take place on the Fourth of July up to that time.

1941 Chief Justice H. F. Stone led the nation in a live radio broadcast of the “Pledge of Allegiance.”

1947 In Washington, D.C. the Independence ceremony at the Monument Grounds was televised for the first time.

1960 The 50-star American flag flew for the first time as Hawaii and Alaska joined the union.

1976 For the nation’s Bicentennial at 2 p.m. churches and people throughout the nation rang bells.

1980 Throughout the country, the Fourth is “observed amid somber reminders” of the 53 American citizens held hostage in Iran.

1992 The seven astronauts in the shuttle Columbia unfurled the Stars and Stripes and chanted “Happy Birthday, America” from space.

2005 In what was described as the biggest Fourth of July blast ever, NASA slammed its two-stage 820-pound spacecraft called Deep Impact into the comet Tempel 1.

2006 The first launch of a space shuttle on Independence Day as shuttle Discovery lifted off at Kennedy Space Center and Stephanie Wilson was the second African American woman to go into space.

We continue to celebrate Independence Day with parades, bar-be-ques, music, and fireworks. Let us continue today to be thankful for the great sacrifices that have been made to obtain and maintain our independence and the freedoms that we enjoy. Happy Fourth of July!