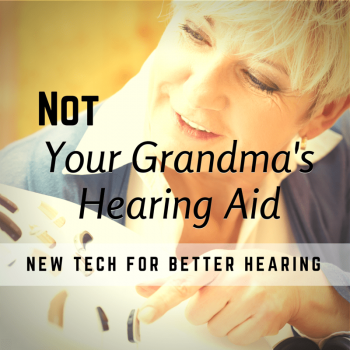 Hearing loss is a common problem as we get older. Less than 20% of the general population has impaired hearing, but that figure rises to 30% after age 65 and to nearly 50% by age 75, according to the National Institutes of Health. The good news is that modern hearing aids, like almost everything else in our lives, have benefited from the digital revolution to work better than ever before.

Growing up around my grandmother, great-aunts and their friends, I heard a lot of opinions about hearing aids, most of them unfavorable. There were complaints about the bulk and appearance of the devices, the way they amplified background noise in crowds, and the hard-to-adjust volume settings. Today, hearing aid manufacturers are solving these problems with digital technology, improved design, and a wider array of options than in the past.

Adults with hearing loss that is mild or moderate can choose a low-profile hearing aid that sits in the ear canal. Even smaller completely-in-the-canal models fit snugly at the opening of the ear canal. People with more severe hearing impairment and those who want larger, easier to handle hearing aids can choose among in-the-ear and behind-the-ear styles.

Improved mic design and digital controls can screen out background noise, prevent or reduce painful feedback screeches, and let users know the general direction a sound is coming from. The directional technology isn’t perfect, but researchers are working on it. Scottish scientists are studying insects’ hearing organs to figure out how to improve the directional microphones in today’s hearing aids — ideally, without adding extra weight or bulk.

The Hearing Loss Association of America, an advocacy group for people with hearing impairment, points out that the digital tech in modern hearing aids allows them to instantly adjust their volume depending on the surrounding sounds.

In addition to these improvements, wireless technology has made it possible to include features that previous generations of hearing aids simply couldn’t offer. Remote control is an option on some new hearing aid models. This lets users change settings without having to remove and handle the hearing aid. For users of two hearing aids, synchronization allows for automatic adjustment of both hearing aids at once. And because so much of the media we hear can now be streamed wirelessly or through a wired connection, many hearing aids now offer the option to connect with the audio streams in smartphones, televisions, computers, and other digital devices.

Finally, the one feature that experts recommend across the board is the telecoil. This is a small copper coil that serves as an antenna to pick up audio from compatible phones as well as from sound systems in theaters, performing arts centers and other public spaces. In those situations, users can switch off their hearing aid microphone and let the telecoil deliver clear sound without background noise. The telecoil isn’t new technology, but its increasing presence in hearing aids and public places makes a world of difference for hearing aid wearers. Telecoils are inexpensive and included in many but not all modern hearing aids, so shoppers should ask before making a selection.