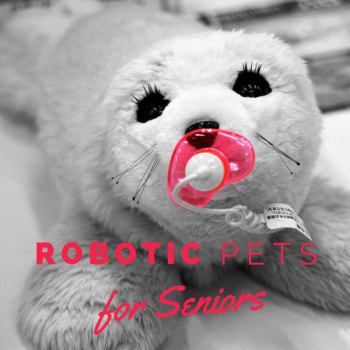 It’s National Pet Month, and we’ve been exploring the benefits of live-in pets and visiting therapy animals for seniors. But let’s not overlook another important class of pets — the kind made from servo motors and ABS plastic. Robot pets have historically been marketed as children’s toys, but there’s been serious research into the benefits of digital dogs and computerized cats for seniors who can’t own or be around live animals.

In a 2008 study, researchers compared the wellbeing of nursing home residents who got visits from a therapy dog or from a robot dog made by Sony known as AIBO. Over the course of 8 weeks, residents who were visited by the robot took longer to warm up to it but reported an overall drop in loneliness comparable to the therapy-dog group. Both groups fared better than the control group of residents, who received no extra visits.

AIBO, which Sony manufactured between 1999 and 2006, was popular in Japan and among robot enthusiasts who could afford the $2,000 price tag. But now, with tech support relegated to AIBO owner forums, many of the AIBO dogs are succumbing to mobility issues, programming problems, and general wear and tear.

Who can resist an adorable (robot) seal?

Fortunately, another company has developed something even cuter. Paro, a plush robotic seal, was built specifically as a “therapeutic robot” to help reduce stress among hospital patients, nursing home residents, and people in other care facilities. Paro is being used in trials in some assisted living and nursing homes, where it’s received a mixed but overall positive reception. Many residents snuggle Paro and talk to it. Some even sing to it while it blinks and flaps its tail and flippers. 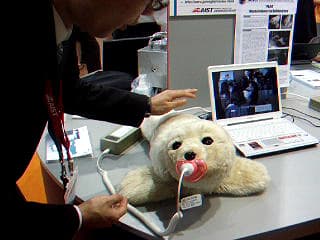 Paro is so lifelike and elicits such a strong emotional response that ethicists have voiced concerns about using robots in lieu of human or animal interaction. Paro’s manufacturer, AIST of Japan, says the robots are meant for settings where pets and therapy animals cannot live or visit. Among the organizations using Paro in the US are MIT’s Age Lab, the Air Force’s Blue Skies senior community in San Antonio, Easter Seals, the Alzheimer Association, and a number of hospitals, nursing homes, hospices, and schools. The only downside of Paro seems to be the price tag.

Robot pets on a budget

If you don’t have $6,000 to spend on Paro, there are plenty of smaller and less expensive robot pets on the market. Among the best sellers at Amazon are Zoomer’s toy-poodle size series of “interactive puppies,” which are smart enough to learn tricks, understand commands in three languages, and follow their owners’ movements with their eyes. Zoomer also makes small robotic dinosaur pets that roar, run, and can be trained to dance.

Zoomer robots are marketed for kids rather than adults, and they’re cute but not furry like Paro. They do have a major advantage over Paro in one important area: Most Zoomer models are priced below $100, comparable with the adoption fee from many animal shelters, without the ongoing cost of pet ownership or the allergy issues associated with pet dander. If you’re looking for a robotic pal to keep you entertained when you’re on your own, these dogs and dinos are a reasonably priced way to get started.

Head over to our Facebook page for more pet-related fun, including our Which SeniorAdvisor.com Dog Are You? quiz AND our photo contest, where you can submit a photo of your favorite furry friend for a chance to win a $100 Petsmart Gift Card!