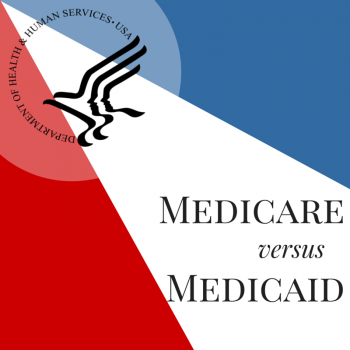 Everyone needs medical care sometimes, but what are the options here in the US? Health insurance is certainly a confusing topic. The terms ‘Medicaid’ and ‘ Medicare’ are mentioned frequently, but what is the difference? Who can qualify? How do you apply? It may surprise you to learn that some people actually qualify for both Medicare and Medicaid.

Let’s take a closer look at these two programs. We’ve marked their differences are in bold.

Medicare is a federal program of health insurance for those over 65 years of age, people with certain disabilities, amyotrophic lateral sclerosis (Lou Gehrig’s disease) and those with End-Stage Renal Disease. Any person over 65 automatically qualifies for Medicare (even non-citizens who qualify for Social Security or Railroad Retirement) without regard to their income; however there is a cost, often deducted from Social Security or Railroad Retirement payments.

Medicaid (known as MediCal in California) is a federal-state program usually administered by the local welfare office and helps with health care for low-income people of all ages. Eligibility for Medicaid is dependent on income and savings and varies from state to state according to cost of living and level of poverty, among other factors. If you have more than a certain amount in savings, then you are probably disqualified until you spend that money, preferably on health care.

Most disabled people qualify, as well as children in foster care and pregnant women. Medicaid may also help cover those who could not afford health insurance on their own.

The Affordable Care Act of 2010 enacted a national Medicaid minimum eligibility level of 133% of the federal poverty level ($15,930 in the case of a two person household in 2015). Your place of residence, as well as your current immigration status and your U.S. citizenship documentation, are also considered in determining Medicaid eligibility.

What are the costs?

The cost of Medicare is made up of health insurance premiums and deductibles paid directly to healthcare providers by the patient before Medicare pays the balance. Because it is a federal program, the rules are the same in all states.

There is often a co-pay, a set fee that the patient must pay for an office visit or prescription and then Medicare pays the balance. The cost of Medicare is paid by those who have paid into the fund, usually through payroll deductions at their work before they retired.

In theory, anyone with less in savings can qualify for Medicaid if they are ‘medically needy,’ but they will have a ‘spend-down.’ This is essentially a deductible, like with car insurance – you first must spend a certain amount each month, then Medicaid will pick up the bill on the rest. The amount is determined by the Medicaid office.

Sometimes there is a co-pay, a set fee that the patient must pay for an office visit or prescription and then Medicaid pays the balance.

There are four parts to Medicare:

Part D provides additional coverage to help cover prescriptions. You will find that a few of the offerings are optional and the person on Medicare may need to pay extra premiums for them.

It is possible to be eligible for both Medicare and Medicaid. If you have Medicare and full Medicaid coverage, most of your health care costs are probably covered. Medicare is handled through the Social Security office.

Medicaid covers much more in the realm of health services that Medicare does not cover, like nursing home care and personal care services. The costs of Medicaid are paid by federal, state and local tax money. The only way to find out if you qualify for Medicaid is to contact your state Medicaid office.

Although Medicare and Medicaid are very different in what they offer and the services that they provide, they are both administered by the Centers for Medicare and Medicaid Services, a division of the U.S. Department of Health and Human Services. You can learn more about each program at Medicare.gov and Medicaid.gov, respectively.

How to Plan a Funeral
The Art of Letter Writing