SeniorAdvisor.com Blog > Blog for Families > Christmas During the Great Depression

Christmas During the Great Depression 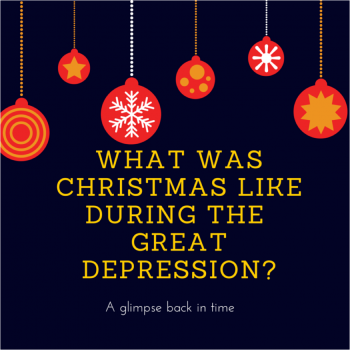 Do you remember getting oranges in your stockings for Christmas? Turns out, there’s history behind that.

A kid during the Great Depression was happy to get a single orange in a Christmas stocking – yes, an orange. Getting an orange was a big deal because oranges weren’t affordable during the rest of the year. Other treats in stockings were bananas, nuts and candy.

If the kids were really fortunate there may have been a toy such as a doll; or a toy wagon for the very youngest.

The Christmases of the Depression were nothing like the over-commercialized, buy-till–you-drop Christmases of today where kids drown in toys. But you have to wonder, which were really the better Christmases?

When the economy collapsed, so did the banks and many factories ended up shutting down. The Middle Class became poor by the calamity and the poor became desperate. To help feed the hungry, soup kitchens and bread lines were started up for the impoverished. Needless to say, practically no one had any real money. So Christmas gifts became gifts of necessity rather than gifts of whimsy.

Most everything that was received as gifts was either homemade or homegrown too. Mothers and grandmothers made dresses and aprons for girls from flour sacks. Boys got socks and maybe gloves; perhaps a really lucky boy got a scarf, one that was hand knitted. In other words, there wasn’t fluff and bling; the gifts were handcrafted for practical purposes.

Decorations for the tree, if the family had one, were handcrafted too. They might be paper ornaments; hand carved wood ornaments and maybe candles also.

The routine for the day of Christmas may have gone something like this. You would have gotten up and then checked to see what presents there were and opened them. Then everyone would have gotten dressed and went to church, either walking or going in a mule-drawn wagon; where appropriate. After church, you would either go home or to a relative’s house for Christmas dinner. The men would sit around and play cards; the women combined all the food everyone brought and cooked – usually chicken was the main course. The kids played, of course. The cleanup was completed by the women. Then some more visiting with each other and everyone went home. Christmas was about family and what you did have; and being grateful for it, not griping about what you didn’t have.

Gifts were made by hand and great thought was given into the making of a gift. People were self-sufficient because they had to be or they and their families didn’t survive.

Families during the depression had it difficult, and they were grateful for food and shelter. They also appreciated having family and sharing time together during the holidays. Each family at a meal contributed what they had to Christmas dinner so it could be shared by everyone.

Do you remember stories about Christmas during the Great Depression? Share your story below!