A Conversation with Rollie, a Very Happy Resident 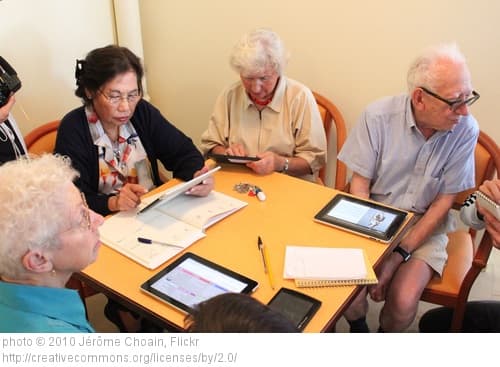 Looking for a retirement community? If you live in the Portland area, keep an eye out for one of Rollie H.’s business cards. The cards simply read: “Rollie, a Very Happy Resident” and include his cell number.

The 72-year-old lives at Cherry Blossom Cottage, an assisted living home in Portland, Oregon. Often heard saying, “I have never lived better in my life,” Rollie is so happy at Cherry Blossom Cottage that he is doing everything he can to invite all the seniors he meets to come join their community. His recruitment efforts have earned him the nickname of Resident Ambassador, as his friends lovingly refer to him. During his free time Rollie can be found in the lobby, where he eagerly welcomes new visitors and hands them his business card. Rollie has also optimized his distribution channels by giving packs of the cards to his friends that visit local physical therapy centers and hospitals.

We learned about Rollie from the community manager of Cherry Blossom Cottage. We noticed several positive reviews popping up on SeniorAdvisor.com for the community, and as we verify all reviews before posting, we reached out to owner Rebecca Meadowcroft, who informed us that one of her residents has been interviewing other residents and visitors and evangelizing the voicing of reviews and feedback.

We spoke with Rollie that day. Having previously resided in Baltimore, Rollie chose Portland when it was time for him to find a new home, as his daughter lives there with his two grandsons. His daughter found Cherry Blossom Cottage, and they happened to have an opening. When he moved in, Rollie was spending his days in bed staring at the ceiling. Now, just a few months later, Rollie has embraced his newfound purpose – sharing his enthusiasm for his life and his community, and encouraging others to do the same.

As the social hub of the community, the lobby provides Rollie with a great venue to get to know his neighbors. As they chat, Rollie will ask if they’d like to leave a review on SeniorAdvisor.com. The answer is almost always yes, as “there’s nothing that anybody doesn’t like about Cherry Blossom Cottage,” according to Rollie. He’ll interview the residents on their likes and dislikes of the community, as well as what brought them to Cherry Blossom Cottage. In addition to his business cards, Rollie always has his iPad on hand, so while his friends tell him their story, he types up a review on SeniorAdvisor.com’s mobile site.

Rollie and his interview process have not only strengthened relationships within his community, but also created an avenue for residents to connect with their friends and family online. SeniorAdvisor.com requires users to register with a valid email account before posting reviews, so Rollie uses this opportunity to set up each resident with a personal email account. After the review is done, residents will ask for Rollie’s help in emailing their relatives, to which he readily agrees. Much like the interviews, they dictate to Rollie while he types up the emails on their behalf using his iPad!

Rollie’s love for his community extends past promoting good word of mouth, as the enthusiastic reorganizer of the bi-weekly book and video clubs. Rollie raves about the food, the caregivers, and the people. He says it’s like living in a neighborhood, and meals are like eating with your family. We can’t help but think that Rollie has had something to do with impacting the wonderful sense of community surrounding Cherry Blossom Cottage. If you come to visit Cherry Blossom Cottage, expect to be greeted with a smile by Rollie (and don’t expect to leave without writing a review on SeniorAdvisor.com!).

How to Downsize Your Home